On 3 May 1946, Gravely flew to Sebring to meet again with Alan Altvater, Sr.  A week later, Veterans key staff began arriving at Hendrix Field to get established – as far as they were allowed – while City of Sebring continued negotiations with the Army over the airport civilian transition.  The air line and intended plans were chronicled by local press in detail.(1)

Not until 4 June 1946, still under the city’s “revocable” right-of-entry permit, did fifteen Veterans tech team members arrived in Sebring to begin the interior overhaul and repaint of the company’s second DC-4, NC57777. She would no longer be a “war bird,” but a civilian flying boxcar.(2) That aircraft conversion was completed within approximately 13 days!

It’s Florida after all! 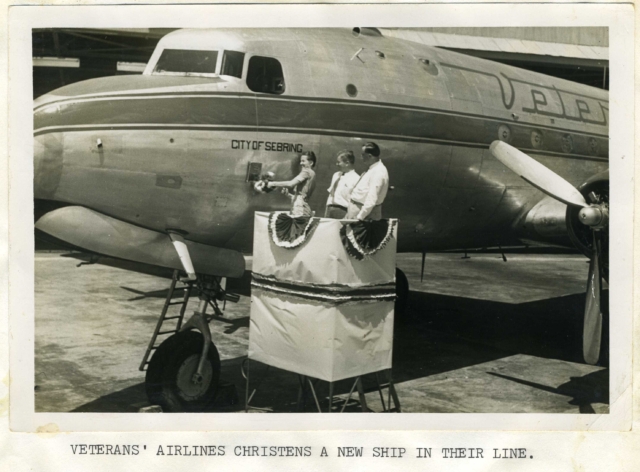 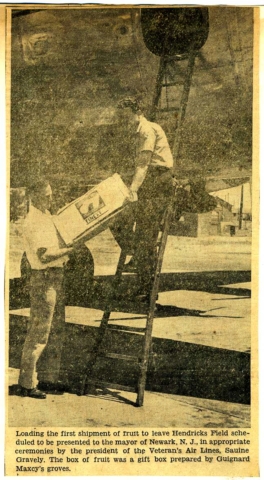 On Monday morning, 17 June, the DC-4 was christened CITY OF SEBRING – with orange juice! – by Mrs. Opal Harris, a member of the Sebring airport committee.(3)

(Dear Reader, I’d have brought champagne for Mimosas if I’d been invited!!! But, no, not likely…I was barely 7 months old at the time!  Gaye Lyn)

Now a “sleek silver and red cargo plane,” NC57777 was “test hopped” the same afternoon, and on Tuesday flown to Miami for weighing in.(4)

With ceremony described by the press as “fitting” and “appropriate,” a week later,  founder and President Saunie Gravely presented the Mayor of Newark, NJ, with a crate from this DC-4’s first shipment —  a “gift box” of oranges from Florida groves belonging to Guignard Maxcy.

However, one week after that delivery,Veterans made a unexpected letter delivery to the Sebring airport committee.

(Dear Reader. Tracing these aircraft is tedious and confusing, but doable. Much had been completed already, but put aside temporarily to concentrate on finding more of our Veterans. The fleet willingly yielded this diminishing research time to their crews. Gaye Lyn, 2015)

But those “25 plus” aircraft plans in March for Sebring did not materialize. And, at this point, I’m shy on explanations — other than reference in this “termination” letter dated July 3,1946. It is signed by Nellie Brenner, Vice President Finance. The letter to Altvater, Sr. gives “the insurmountable problem of logistics” as reason for Veterans departure from Sebring.

Somehow along the line, the rest of the Sebring story needs explanation. I’m guessing (and that is definitely not my job) that it was a combination of the Army not moving forward fast enough and yet-to-be-discovered (by this researcher) changes within Veterans.  We know that less than one week prior to the date of this letter (3 July 1946), the first DC-4 overhaul was completed at Sebring.  And the press reported a second aircraft was expected “this week for major overhaul from Newark.”(5)

That did not materialize either. 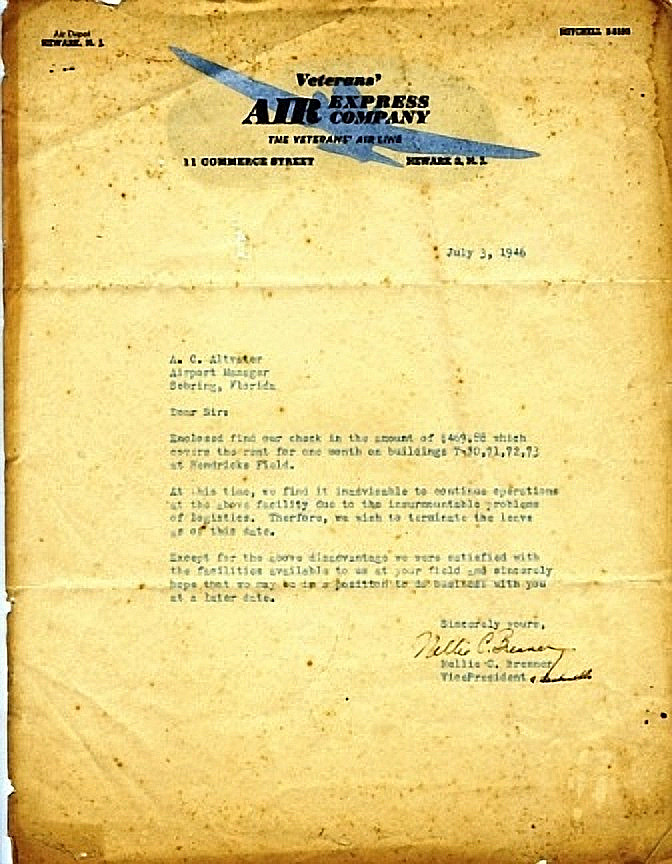 “Veterans’ Airlines (sic) Heads to Arrive Tomorrow to Start Operations. The Highlands County News 9 May 1946. [Note: “Heads” here is a noun, not a verb. Refers to Gravely and key personnel.]