Talking to her over the phone makes me feel happy. Her energy, our fun topics, her laugh always make me smile. But nothing compares to being face to face with Robert Gries‘ spunky Army Air Corps wife…and 1st generation Veterans Air Express Marilyn Gries

On Tuesday, July 25, our extended lunch grew into dinner. We just kept talking. And bringing up new subjects. And talking and laughing as we discovered things we have in common. Then Thursday, July 27, lunch in a fabulous Jewish deli introduced me to my first-ever brisket slider. Yum! Complete with potato pancake. When we weren’t happily munching somewhere, we relaxed in Marilyn’s lovely new-to-her apartment overlooking a great swimming pool.

“…a passenger is too much responsibility.”

But wait. I mustn’t forget to mention somewhere else we continued to chat. In Marilyn’s car. With me in the passenger’s seat! (Dear Reader, I’m here to tell you that this wonderful nonagenarian who I call my precious friend handles her car like a truck driver – in the best translation of the term.) Her depth perception pulling into tight parking spaces was startling at first. But by the second and third similar maneuver, I realized I was in good hands.

Since moving to her apartment close by to her old neighborhood, Marilyn still goes out many days a week to play cards and Mahjong with her buddies of many years. She drives herself – and says the local street there feels like her “private road.”

“I never take a passenger with me. It’s too much responsibility,” she proclaims.

(Hmmm! As I’m writing this, it’s dawning on me I got to be an exception to that “never” rule!)

Best son under the circumstances.

Marilyn grew up in Newark, NJ. And, like me, was the best son she could have been to her father under the circumstances. That’s my phrase, but she describes her relationship with her dad identically. He got her a BB gun for Christmas because the boy downstairs had one and Marilyn wanted one. Having already taught me to shoot a .22 caliber rifle, my dad wanted to get me a .410 shotgun when I was 12, but unsuccessfully convinced my mother. Marilyn and I both love the fact that we got to do things other little girls did not.

Learning to drive had one notable difference. My Dad taught me to drive. But her dad didn’t like to drive. So, Marilyn’ s mother taught her.

“One day Dad was riding in the car with me,” she said. “And he didn’t like the way I was driving. He kept telling me ‘do this,’ ‘do that.’ So I pulled over, slipped out of the driver’s seat, walked away, and left him there!”

I both gasped and chuckled. To which she responded, “Oh! I walked back and got him. But Mom said that was not a very nice thing to do. Maybe,” she mused, “but I felt since he didn’t want to drive himself, he shouldn’t be so critical.”

Robert Gries joined the service 15 May 1942. Marilyn and Bob were married in 1943. So she did not fit the oft used “war bride” category.

However, she did accompany Bob to all of his frequent re-assignments to various military training bases. They stayed short periods of time and left with very little notice to move on to the next place. Places like Tucson’s Davis-Monthan for initial Navigator training. Langley, White Sands/Alamagordo, San Antonio, Houston, Newport News. (Not necessarily in that order.)

“One of the places we stayed early on for his training was Hondo, Texas,” she told me.

“We stayed in a small apartment, like a boarding house. I arrived by train at 1 in the morning and, quite honestly, I was frightened doing this on my own. (Bravado does have some limits!) So I took a chance and asked a young airman who had also been on the train with me, if he would help me. And he did.”

The airman escorted Marilyn to the boarding house. The owner came to the door in his bathrobe and was very gruff.

“I never went to bed that night. The room was on the third floor and was not clean. I decided to wait for Bob to come in the morning.”

Training ended and in 1943 Robert Gries went off to war for almost a year…based in England, as a navigator with the 392nd Group of the newly formed Eighth Air Force, on a bomber named “Pregnant Peg.”

Of the oh! so many things we talked about this week, one of the most touching to me is this story.

“When there would be a particularly bad battle involving airstrikes, I would always be terribly worried about Bob and wonder if he had been part of it. It was terrible not knowing if he was okay. He knew that. And we devised a way of his communicating with me.

“Letters would have been impossible and certainly not timely enough. But the government allowed him to send telegrams. I have a stack of them still. He would telegram, ‘Happy birthday, Marilyn. Love Bob.’”

Silly me asked, “Was it your birthday?”

She giggled. “No, it was just a signal to let me know that he was okay.”

Marilyn describes a scrapbook about his WWII experiences which Bob created.  (It might even included Veterans Air.)

“It was very extensive and meticulous. That’s how he was about things. And he told me specifically that he wanted it to go to the Mighty Eighth Museum if none of our three sons wanted it. We visited the Museum many years ago together. And he went back in more recent years with a buddy. I’m working with our daughter-in-law to locate the scrapbook. I would very much like for the Museum to have Bob’s precious accumulated memories. It would mean a lot to both of us”

I, too, unexpectedly visited the Mighty Eighth in a Savannah suburb on this trip after I visited Marilyn. The museum is nothing short of fabulous. They would, indeed, welcome the scrapbook. I hope it finds its way to their archives. I’ll keep you posted. Meantime, visit their website. Click here on their formal name…National Museum of the Mighty Eighth Air Force.

While the stories in this Post are not directly related to Veterans Air, they have everything to do with the very fabric of Marilyn and Bob and the other men and the women who were involved in its inception. Marilyn liked the idea that Bob was involved with my Dad’s air line. And I’m reaping the benefits of both of them playing a role.

This was a joyous visit, Marilyn. You were my first inspiration and motivation for buying Gracie and making this trip. Thank you, thank you. 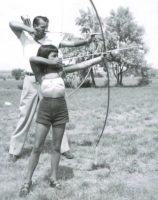 Journal to my Dad