I have had pages of research for two weeks, but held off calling a phone number I had discovered because I wasn’t so sure it was the correct Robert Chambers — the Veterans Air Express Robert C. Chambers.  And then I asked myself, “Since when has that stopped you from further exploration??!!”

So I called the man I suspected was Robert’s #2 son from information in an obituary…the source of research that brings me great sadness as well as helps me verify and speak with the families of Dad’s people. The irony and greater sadness is that this is my Robert Chambers, and his family had returned just last week from Arlington National Cemetery for Robert’s burial.

His son, Bruce Chambers, listened only a short while to my “elevator intro” on the phone before he interjected Veterans Air Express.  And caught me totally off guard for sure. While I always hope I’m right, I’m always struck with silence and those “Gooney Bird Bumps” I keep telling you about at being right. Robert spoke to his son as recently as last year about Veterans Air.  And there’s a folder on Veterans that Bruce has been reviewing to share with his siblings…and now with me!  The folder contains clippings with photos and stock certificates which he rightly supposed are worthless – except for the sentimental value!

I knew that a Veterans Air Express Robert Chambers existed from the list in Air Transport July 1946 feature article. But no mention was made of his background.  Then I found him in the Air Trails Pictorial April 1946 story that described  Robert as 25 years old, from Long Island, NY, and a former pilot with the 9th Air Force in the European Theater of Operations, E.T.O.  And finally a reference in the Newark Evening News in November 1945, naming Robert as being from Floral Park, L.I., and a co-pilot with Captain Robert Montanarella on Veterans Air’s first cargo flight – from Louisville to Teterboro.  I know they were flying the DC-3 named Gaye Lyn within a few short weeks, because this was the flight my Dad accompanied that caused him to miss my birth! (Not my Mother’s favorite story!!)

Bruce is going to call me back. But I’ve been so remiss in postings on my site, that I wanted to tell you this much of the story now while I’m still as excited as I have been each time I’ve found another of our Veterans Air families.  It reminds me that this adventure really did happen!  And that I must be more diligent in my efforts to find more of our crews and founders.

I’m including this photo again – in hopes that when Robert Chambers’ sons or daughter visit the site, they will be able to say, “Hey!  Our Dad is in this photo!” 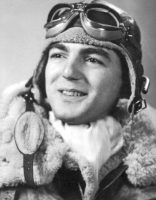