I am tickled to show you the Saunie-Gravely-weds-Lydia-Amadio announcement in my Mom’s hometown newspaper. I stumbled on this clipping today in the Carteret (NJ) Press, September 3, 1943.

MARRIAGE ANNOUNCED
CARTERET (NJ) – Announcement has been made of the marriage of Miss Lydia Amadio, daughter of Mr. and Mrs. Patrick Amadio of McKinley avenue (sic), and Sergeant Saunie Gravely of West Virginia. The wedding took place in the rectory of St. Johseph’s Church with the Rev. Joseph McLennan officiating. Sergeant Gravely is stationed at Tyndale Field, Panama City, Fla.

[Dear Reader, if you can, notice upper right corner. Certainly it doesn’t say Price Three Dollars; so it says Price Three Cents, right?  Part of the fun of this project surfaces in discoveries of things I’m not looking for!   Actually, I can’t even remember what “key word” I was searching when I found this announcement.  After I clicked on the article and saw the content, I got totally detoured!]

Isn’t this photo beautiful?  It was not part of the newspaper clipping.  But it’s certainly part of my treasure trove.

Mom & Dad’s anniversary was July 5.  So this is a late announcement.

It mentions Dad was stationed at Tyndal Field, Panama City, FL.  I had forgotten about their Florida “honeymoon.”  As a married soldier, they had off barracks housing — in a trailer park.

One morning after Dad had left for the base, Mom awakened to the trailer rocking vigorously — left to right, right to left.  She grabbed her robe and, before she had it totally wrapped around herself, she was OUT of the trailer.  Pounding almost hysterically, she bashed on the neighboring trailer door for help.  Fortunately, the man-of-the-trailer was home and went to investigate while my Mother was calmed down by his wife.  My Mother was not amused when he came back laughing.  “What?” she demanded.  “Well, Lydia, it’s a family of wild pigs scratching their backs against the bottom of your trailer.”

That’s as far as this story ever got retold, because the accompanying laughter drowned the rest out!

Then there was the story of the “gila monster” Mom sucked up into the vacuum cleaner in Phoenix.  But I’ll save that for another time.  Let me just say that Saunie Gravely weds Lydia Amadio resulted in much more than an airline adventure named Veterans Air Express and a DC-3 named GAYE LYN. 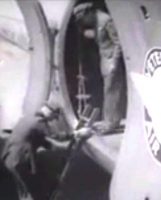