Casually reading along in The (Bergen) Record newspaper in June, a shocked John Schaus finds Veterans Air Express.  After 70 years, he can’t believe he is reading about his post-WWII employer where he became a DC-3 pilot.

The founder’s daughter is doing research on the air line right in his back yard – at the Aviation Hall of Fame and Museum of New Jersey in Teterboro.  John goes there and asks Shea Oakley, Executive Director, for the daughter’s phone number.

When my cell caller ID displays a city in New Jersey, I am instantly curious. But my knitting group surrounds me and my friend’s house has poor cell coverage.  So, I step outside.  And just as I hear a male voice on the line, we get disconnected.

“…not selling anything. Don’t hang up!”

“I’m not trying to sell you something. I promise. Please don’t hang up again,” pleads the  voice immediately upon my answering his second call.

I have to laugh. I recognize the frustration. I’m always afraid somebody’s going to hang up on me before I even get started with my elevator speech about researching my Dad’s airline.

The next statement stopped me in my tracks.

“…I flew fish. Maine to Teterboro.”

“I saw the article in the newspaper. I used to fly for your Dad’s airline. I flew DC-3’s. Fish. From Maine to Teterboro.”

That’s how 90-year old John Schaus from Oakland, NJ, introduces himself to me. And the newest 1946 crew member joins my 2016 Veterans Air Express family.

We speak again a few days later at great length (and with much improved cell service).

John joined Veterans Air in late 1946. He heard about flying jobs with Veterans from Fred Wehren, owner, developer of Teterboro Airport and later inductee to the Aviation Hall of Fame of New Jersey.  Wehren was also our land lord at Teterboro. So he wrote John a letter of recommendation.

Wehren had played another instrumental role in John’s life.  Only a year earlier, when John was still 19 years old, he had signed papers that helped John get into the Army Air Corps.

“When they tested me, I was up against guys older than me. Guys who had been to college. I didn’t figure my chances were so good. But a couple of them didn’t pass muster, and I qualified in all three areas – bombardier, navigator and pilot training.

The Army gave me my choice. Of course, I picked pilot school.  I took to flying like a duck to water.”

By the time John was 20, he was flying B-25’s.  No wonder his transition to our post-war DC-3’s amounted to some briefings and a check ride.  (And 60 years later he piloted the Gooney Bird again. This time in an air show! You have read that story, haven’t you?)

John flew for Veterans just a short while — probably only three or four flights. Maybe he flew the GAYE LYN – or maybe by then she’d already slide off the taxiway into a ditch at Teterboro and damaged her undercarriage.

I ask John if  those “fish” he flew in the DC-3 were really lobsters.

“Yes, yes! That’s exactly what they were. Lobsters! I had forgotten.”

I also ask if he continued from Teterboro to Florida with lobsters. No, he said. He had not. He had no knowledge of a second-stage destination.

Lobsters in the bathtub over night – uncrated !

I’m laughing as I write this, because I wonder if John happened to be flying those trips when weather was so bad that the lobsters spent the night at our apartment in New Jersey – uncrated, in our bathtub. THAT may be why he insists he didn’t fly the lobsters to Miami!!!  I must remember to ask him about weather conditions next time we speak. (Oh, yes!  I do know about the lobsters. Dad told me about them many times! Actually, so did Mother!!!! Other stories for another time, perhaps!)

John Schaus also sold passenger tickets in your Newark office on 11 Commerce St. It seems many of Veterans’ crew members pulled that duty. They were a willing and versatile lot. Able and eager to tackle whatever chores were required to make their venture successful.

Since John tells me he doesn’t “do” computers, after our second phone chat, I mail a package of stories with photos from the website and a list of crew members he may have encountered – in hopes of creating an “old home week” experience for him.

Reviewing the list, John perks up. Robert Chambers rings a bell. So does his photo. Chambers would have been John’s Chief Pilot on the DC-3’s. Robert Ferguson, Emil Froehlich (from Montclair, NJ), and Walter Haag seemed familiar, too.  And for sure, John knew Robert Terwilliger — while they were at Veterans Air and afterwards.

John says Terwilliger had a dairy products business with a delivery truck and milk routes. It was called Terwilliger & Wakefield. When home delivery demand dwindled, the company opened a store. John Schaus worked there between flying for Veterans Air and reenlisting in the Army as a 2nd Lieutenant in April 1948, after one year of college.

More show and tell about John in Part Two of Three.

EDITOR’S NOTE: I have searched and researched for Robert Terwilliger unsuccessfully. Perhaps the dairy company name will be a valuable clue. I’ll let you know!  And, yes, I’m still seeking Ferguson, Froehlich  and Haag so if you have any connections, please contact me.

On the other hand…very soon I will introduce you to yet another newly-found and extraordinary Veterans Air Express Navigator who flew UNRRA contracts to Prague and Warsaw.  His name?  Michael Frome. 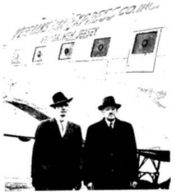 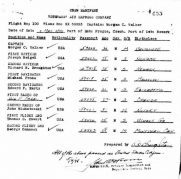