Talk about a privilege! Before I even met Jack, I’d seen photocopy entries from his logbook for flights in both of Veterans’ DC-4’s. How cool is this, I thought!

But then in Florida, actually holding his logbook in my hands and paging through, I was stunned. Then shocked. Then speechless!

What was I looking at? Did this unfamiliar tail number belong to our “missing” DC-3?  The “third” DC-3 that kept popping up in articles and narrations, but which I had been unable to find in any registration or tail number searches?

The answer was, to borrow one of Jack’s favorite responses, “Yep!”


There it was. Jack flew NC88829 on two Newark-Miami-Newark trips between 22 January and 29 January, 1946 — the “snow bird” season.  He flew NC88829, our illusive, missing, unknown tail number.  Then it dawned on me. NC88829 “almost” certainly was Veterans Air’s first DC-3. Ipso facto…she was the GAYE LYN, named within weeks of my birth in late November 1945.  At that point, I was really pretty excited…it looked as though Jack had flown “my” airplane!!!

A page from Jack Stettner’s logbook. It reveals (for the first time in my research) a Veterans Air Express DC-3, tail # NC88829.

To prove or disprove that Jack piloted the GAYE LYN.

So, we began trying to prove (or disprove) it by studying different DC-3 liveries we had seen in various photos — some from my research, some from Jack’s collection.  None of which reveal their tail numbers.

Then…we got closer!  Al Stettner, Jack’s son, found incredible photos in a magazine feature article in AIR TRAILS PICTORIAL.  One shows a DC-3 in full livery — AND we can see the name GAYE LYN on the side.  Still no tail number, but now we know what the rest of the airplane looked like.

And then there’s the more important bonus of this fabulous Veterans Air Express “group photo.”

Look at these handsome men!  All dressed up in their Sunday-go-to-meetin’ clothes.  And look at those smiles!  I love that THEY obviously love what they’re doing here.  They are involved in this aviation adventure and dedicated to making it work.

Dear Reader, here’s the most fun part of this research. The day after this Post went “public,” one more man in this photo was identified by his son and grandson! John W. Greenleaf. And later still, i.d. of Robert Chambers was confirmed by his son, Bruce. I had matched Chambers to Montanarella, because the two Roberts had crewed the DC-3 together. Gaye Lyn 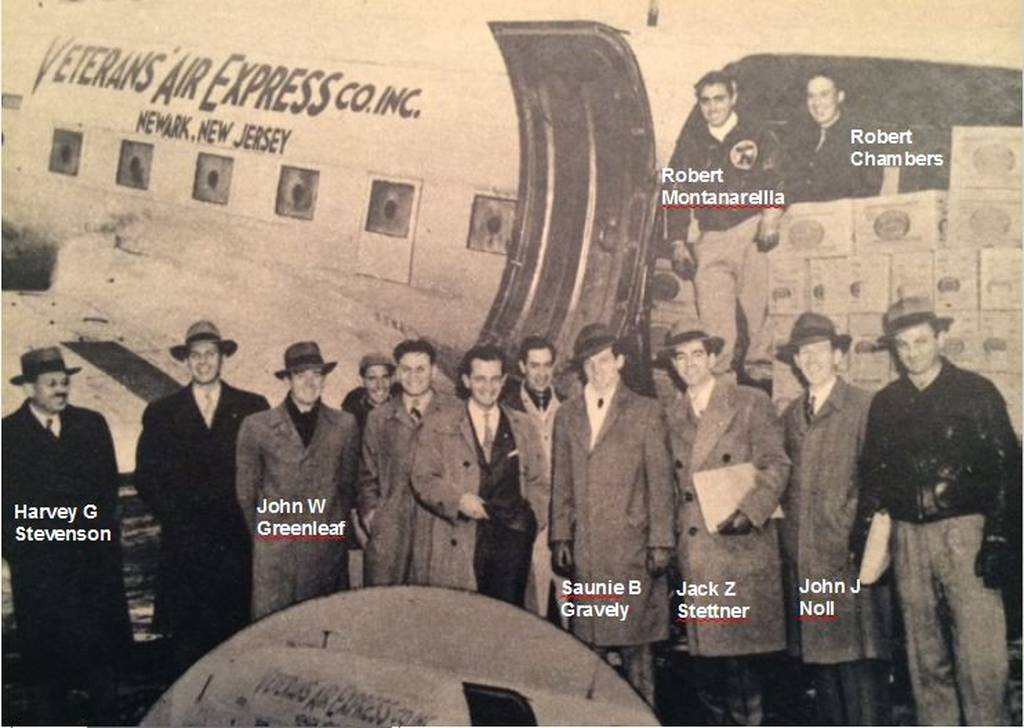 These good looking guys all work for Veterans Air Express. To date, we can only identify (from our far right…) #2 is John Noll, #3 is Jack Stettner, #4 is Saunie Gravely. Can YOU i.d. anyone else? PHOTO CREDIT: AIR TRAILS PICTORIAL, April 1946. Used without permission; still looking for someone to ask.

As dedicated as I am, I must stop here and continue the rest of this particular story about Jack Stettner on another day.  I’ve written it, but I need to prepare accompanying photographs.  And that’s pretty time consuming — for me!!!

So, Dear Reader…I’ll be back.