In early February 1946, the City of Sebring (FL) had been granted “interim,” “revocable” permission by the War Assets Administration to transition the well-known military training base, Hendricks Field, to civilian use. They operated initially under a government “right-of-entry” permit to Hendricks Field and in early June, 1946, were still doing so.(2) 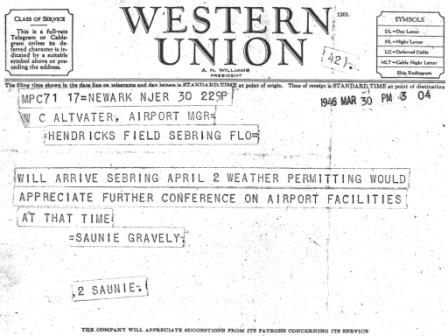 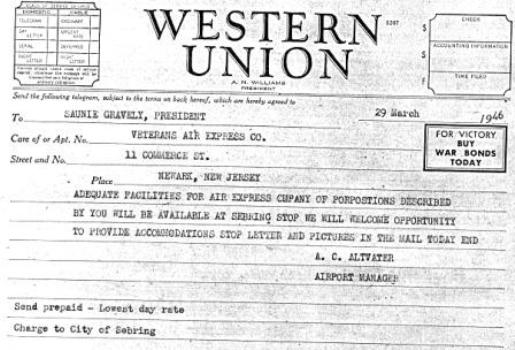 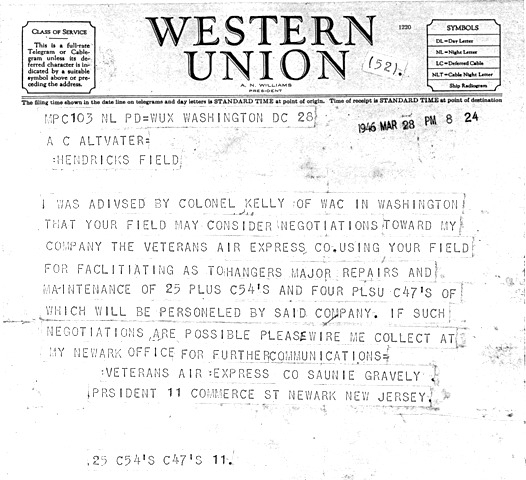 Veterans and The Eighth to be first tenants

On June 4, 1946, fifteen Veterans tech team members arrived in Sebring to begin the interior overhaul and repaint of the company’s second DC-4, NC57777.  She would no longer be a “war bird,” but a civilian flying boxcar.(7)  That aircraft conversion was completed within approximately 13 days!  And the DC-4 was christened THE CITY OF SEBRING on June 20th — with orange juice! (8) (I’d of brought champagne for Mimosas if I’d been invited!!!  But, no, not likely…I was barely 7 months old at the time!)

The Mayor of Newark (NJ) was the recipient of this DC-4’s first cargo which my Dad personally delivered in his role as Veterans Founder & President.  [No photo available.] It was a “gift box” of Florida oranges from groves belonging to Guignard Maxcy. By late June, other perishable fruits and vegetables were being transported outbound from Florida.(9)

In his March 1946 telegram, Saunie described the projected plans & dreams of Veterans’ fledgling endeavor to needing facilities for “major repairs and maintenance of 25 plus C54’s and four plsu (sic) C47’s…“.  By June that year, the fleet numbered five, as chronicled in Allen Altvater Sr.’s gathering of press clippings and historical data.  My own corroborating records show three DC-3’s and two DC-4’s.  [Tracing these aircraft is tedious and confusing, but very doable.  Much has been completed, but put aside temporarily to concentrate on finding more of our Veterans. The aircraft are secondary subject matter during this precious time frame.]

But those “25 plus” aircraft plans for Sebring did not materialize.  And, at this point, I’m shy on explanations — other than reference in this “termination” letter dated July 3, 1946 and signed by Nellie Brenner, Vice President Finance.  The letter to Altvater, Sr., gives “the insurmountable problem of logistics” as reason for Veterans’ departure from Sebring.

Somewhere along the line, I must determine the rest of this story. I’m guessing (and that’s definitely not my job) that it was a combination of the Army not moving forward fast enough and as-yet-unknown (to this Researcher) changes within Veterans.  What I do know is that less than one week prior to the date of this letter, the first DC-4 overhaul was completed at Sebring and the press reported a second aircraft was expected “this week for major overhaul from Newark.”(9) That did not materialize either.

All newspaper article titles are in quotation marks and are from The Sebring American [Sebring, FL]. It should be noted the paper was renamed (a number of times) during 1946 by the owners, The Perry Group – which explains at least one photo caption reference to The Highlands County News.

Veterans Air sets up #2 operations base at Sebring Air Terminal