First DC-3s ferried from Valdosta military base by Veterans Air.

Valdosta. Not a common name. Valdosta. Why does it sound so familiar? Trip planning through Georgia, I see the name several times on a map. It rings a bell. But nothing comes to mind – until 20 miles north of Valdosta on 27 June this past summer while heading south to Florida. I remember!

A Pilot Running Log maintained by then soon-to-be DC-3 Chief Pilot Robert Chambers shows entries in Nov and Dec 1945 from VD to LV, when Veterans Air ferries its first two DC-3s to Louisville, KY, for civilian conversion. The aircraft are evidentially stored at VD while awaiting sale by the U. S. government’s Reconstruction Finance Corporation. R.F.C. is Veterans source for acquiring the DC-3s with some much appreciated intervention by founder Saunie Gravely’s West Virginia Senator Harley Kilgore.

I pull off the road inside city limits. Smartphone search for the local airport. Call and ask for the airport manager. Jim Galloway takes my call.

Without introduction, I ask him, “Was your airport in existence in 1945?”

“Oh, yes! But it was a military base back then.”

BINGO! Now I introduce myself. Tell Jim Galloway why I’m calling. And ask if I may stop by since I’m “in the neighborhood” (from Santa Fe)!

With true Southern hospitality, not only does he personally welcome me, Jim spends the next hour acting as airport docent including taking me to the Tower. And, on the staircase landing half way up, because I’ve told him my husband Harry was an Air Force Air Traffic Controller in the ’60s, Jim points out retired ATC equipment (non-operational) that they’ve preserved from the “old days.”

At first glance, it appears the Tower has three Air Traffic Controllers – two women and a man. But, no. One is an Advanced ATC Graduate, the other an Advanced ATC Student Trainee from Wireglass Georgia Technical College. Their three-category ATC program includes on-the job training and they are “in control” of the Air Traffic Control Tower at the Valdosta-Lowndes County Airport. The second woman is their ATC Instructor, a U.S. Navy Reserve Chief.

Fortunately for me, my visit hits between air traffic activity, and we have a chance to share stories. They explain their career program which fascinates and impresses me. Clearly a win-win for the airport and a solid, brilliant win-win for the students. And I enjoy telling them about the Veterans Air connection to their airport. The photo shows how much we enjoy meeting!

When Gracie and I roll on down the road, I’m still grinning. What an unexpected treat! While the hangar(s) in which our two Gooney Birds were photographed in 1945 no longer exist, it doesn’t matter. The earth under my feet and the runway out the Tower window are vital parts of Veterans Air history.

Not only have I just been there…but now, Dear Reader, you have been, as well!

VALDOSTA is wrongly identified in the above story!! 🙁

It is true I visited the Valdosta airport. But my research was insufficient.

It was the wrong airport!

Five weeks ago, after I drafted the above story, a credible doubt about the 2-letter identifier VD surfaced. I had totally forgotten information I confirmed three years ago!!! It took me until today to unravel the confusion…and make a decision. I had such a grand time at Valdosta and enjoyed the people so much and loved learning about the ATC training concept that I wanted to share it with you anyway. So today I decided to Tell You Like It WAS — and reveal the “rest of the story” here..

When I made the call from my car in June, I failed to ask Jim Galloway if VD was his airport’s 1945 identifier. I only asked if the airport was “in existence” then. It seems so logical, so rational that VD would be Valdosta…right? Wrong!

Instead, today’s research again indentifies VD as Augusta, GA, Bush Field, a military base from 1941 until 1948. Augusta housed Georgia Aero Tech (one of only three contract pilot schools in the country to offer basic flight training) and had begun build-up of Camp Gordon when the Army declared the field of no further use and transferred it to the City of Augusta.

Loud shout-out to Librarian Joanne Evanoff at Embry-Riddle Aeronautical University Hazy Library, Prescott campus. Within 48 hours after I called for her help, she chased down a 1944 AOG in University of Chicago which contained our answer. Thank you, Joanne!

Now, Dear Reader, you know the rest of the story! 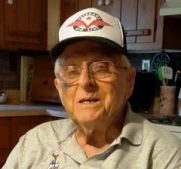